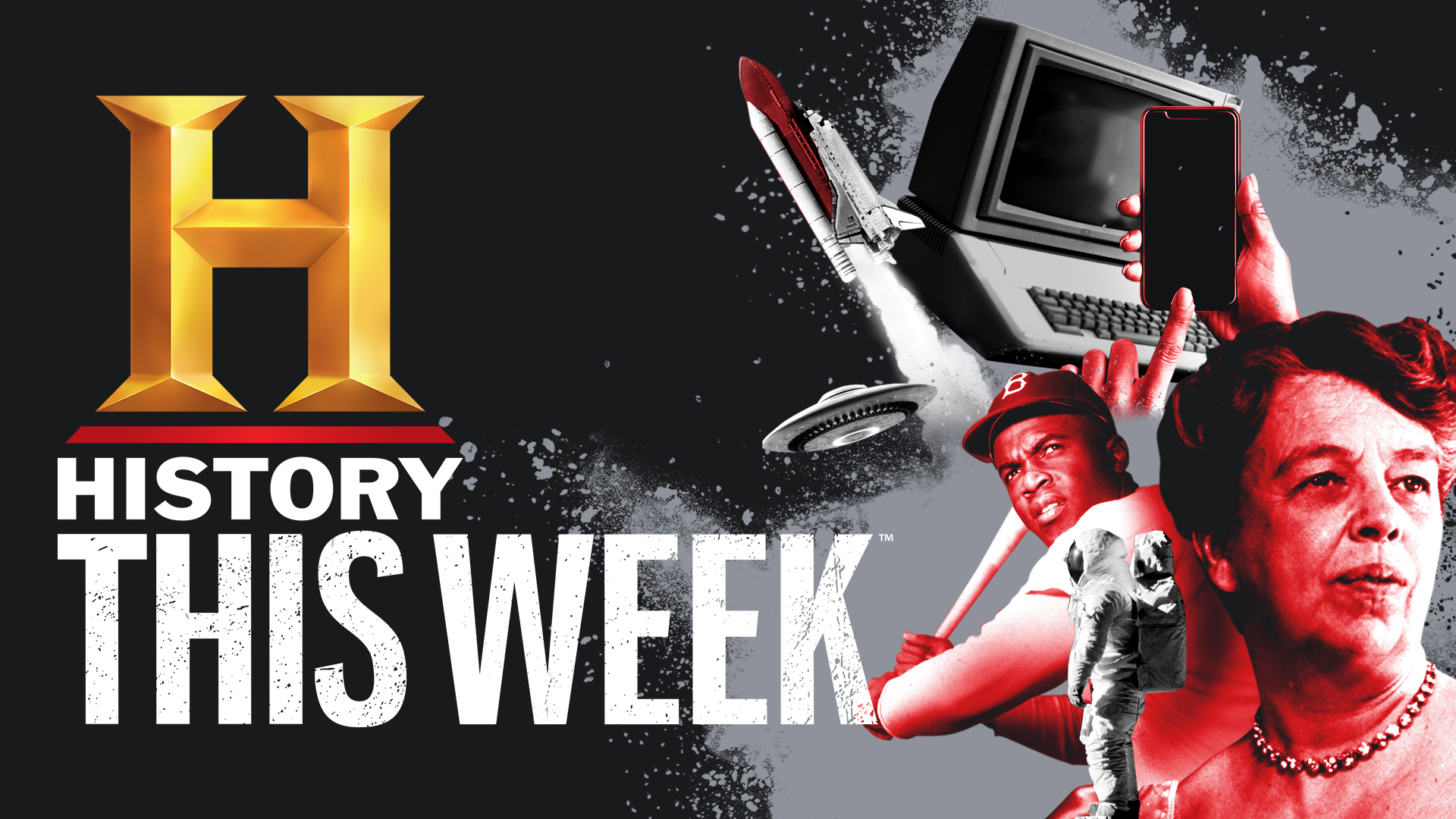 This week, something momentous happened. Whether or not it made the textbooks, it most certainly made history. Join the HISTORY This Week podcast as we turn back the clock to meet the people, visit the places and witness the moments that led us to where we are today.

October 15, 2001. Senate Majority Leader Tom Daschle receives an innocuous-looking letter. It has childlike handwriting and an elementary school return address. When an intern opens the envelope, white powder spills all over her clothes and wafts into the air. Soon after, the confirmation comes: Anthrax. This attack is one in a series of letters that arrive at media offices all over the country, just weeks after 9/11. The letters prove to be untraceable, and the investigation becomes one of the hardest and most complex in FBI history. How did investigators close this impossible case? And what remains unsolved to this day?

October 8, 1939. In the Tibetan city of Lhasa, thousands of people have flooded into the streets to welcome the next Dalai Lama, a young boy of 4 years old. He doesn’t know it yet, but he’ll become the spiritual and political leader of the Tibetan people at the age of 15, right in the middle of a war. How does someone so young prepare for something so big? And what can the Dalai Lama’s very unusual life teach the rest of us about what it means to be a leader?

No Representation, No Peace

September 30, 1765. Almost a decade before the American Revolution, delegates from four colonies gather in the first unofficial meeting of the Stamp Act Congress. The congress has been called to respond to a new British tax on the colonies, the Stamp Act. It’s essentially a tax on paper, and Congress’ response will be the first official act of distention by the colonies against the British. Unofficially though, the people are rioting in the streets. And it’s this popular protest, more than Congress’ tempered response, that will bring the Stamp Act down. How did the Stamp Act riots become a spark that would ignite the American Revolution? And what does it mean that we’ve been protesting for change since before America’s founding?

September 24, 1955. President Eisenhower is asleep in his bed at his in-laws’ house in Denver. At around 2 AM in the morning, he’s jolted awake by chest pains. No one realizes it until the morning, but Eisenhower has had a heart attack. His cardiologist calms the public and tells them that their President will be alright – with some lifestyle changes partially inspired by new, cutting-edge research from a little-known scientist: Ancel Keys. And that very research will change the way Americans, and the world, will eat forever. How did Keys, an oceanographer-turned-nutrition-scientist, end up changing the world’s relationship with fats? And was this a change for the better?

September 16, 1965. Cesar Chavez and the National Farmworkers Association have been plotting a Mexican-American labor strike for years, concentrating their efforts in the farming community of Delano, California. But just one week earlier, Filipino farmworkers decided to strike on their own, disrupting these carefully organized plans. So Mexican-American farmworkers and their families gather at a local church in Delano to hear whether Chavez has made a decision: will they join the Filipinos and strike, even if they might not be ready? The answer is a resounding yes. What happened when the Filipinos and Mexicans joined forces? And how did a labor movement started by farmworkers in a small California town take the nation by storm?

September 10, 2002. Thieves have broken into basements in two cities in Afghanistan to steal plastic containers. Those containers were holding seeds – extremely vital seeds. But the thieves didn’t want the seeds and dump them. With that, a critical natural resource, one of the most important on Earth, is lost forever. Today, we are in a race to save the world’s seeds. How has an international coalition of scientists worked to conserve the world’s seeds? And why might they be the key to protecting the future of humanity?

Thank you to our guest, Cary Fowler, former executive director for the Global Crop Trust and one of the founders of the Global Seed Vault.

Sept 5, 1698. Tsar Peter the Great of Russia returns home from a year-long European tour. When noblemen, religious figures and friends gather to welcome him home, Peter pulls out a straight razor, holds it to their throats, and…forcibly shaves their beards. This event will go down in history as a first step towards Russian geopolitical power. Before Peter’s reign, Russia was an isolated nation that was largely ignored by the rest of the world. How did Peter the Great almost single-handedly drag Russia onto the world stage? And how did his great beard-shaving endeavor lead to the Russia we know today?

August 25, 1797. Alexander Hamilton, the former Secretary of the Treasury, has published a new pamphlet. At first, readers assume this is going to be another one of Hamilton’s pro-Federalist, ideological screeds. But soon, the whole country will realize that this is something very different: an admission of guilt. This wasn’t about a crime, but an affair – the first sex scandal in the history of American politics. Why did Alexander Hamilton openly confess to his extramarital activities? And if he hadn’t, how might American History have unfolded differently?

August 18, 1920. In the third row of the legislative chamber in Nashville, Tennessee, 24 year-old Harry Burn sits with a red rose pinned to his lapel. He's there to vote on the 19th Amendment, which will determine if women nationwide will be able to vote. Burn’s shocking, unexpected vote, “yes,” will turn the tides of history, even though women had already been voting for decades before 1920, and many women still won't be able to vote for decades to come. So, what did the 19th Amendment actually do for women in America? And what, on this 100th anniversary, does it show us about our own right to vote today?

The Birth of Hip Hop

August 11, 1973. At 1520 Sedgwick Avenue in the Bronx, 18-year-old DJ Kool Herc plays his first New York City party. The dance floor is packed, the energy is wild, and Herc gives the performance of a lifetime featuring one very specific innovation on the turntables. Herc and the partygoers don’t know it yet, but this event will go down in history as the birth of one of the most popular musical genres to date—hip hop. How did this party give way to a multi-billion dollar industry? And how has hip hop become so much more than the music?

August 4, 1987. The Federal Communication Commission’s leadership has come together in Washington D.C. to decide the fate of a vital issue: fairness. For the previous 40 years, the FCC has attempted to ensure that TV and radio broadcasters present both sides of the political issues discussed on their airwaves. But by the 1980s, the political landscape has changed, and the Fairness Doctrine will soon be no more. Today, we talk to two of the major players who fought on both sides of this great debate to explain what the Fairness Doctrine actually did, why it died, and where exactly that leaves us today.

July 31, 1492. In cities, towns and villages across late medieval Spain, whole districts have emptied out. Houses abandoned, stores closed, and synagogues—which until recently had been alive with singing and prayer—now sit quiet. Exactly four months earlier, the King and Queen of Spain issued an edict: by royal decree, all Jewish people in Spain must convert to Catholicism or leave the country, for good. Why were the Jews expelled from Spain? How did Spaniards, and then the world, start to think of religion as something inherited, not just by tradition, but by blood? And how does this moment help us understand the challenge of assimilation today?

July 22, 1934. John Dillinger, America's most famous outlaw, is gunned down by federal agents outside the Biograph Theater in Chicago. Dillinger's death is the final act in a crime spree that involved multiple prison breaks, dozens of bank robberies, and more than one violent shootout. But despite all the money Dillinger stole and the deaths he caused along the way, the public still adored him. How did a man named “Public Enemy #1” become a national darling? And how did the pursuit of John Dillinger make way for the modern FBI?

July 15, 1945. It happened within a millionth of a second. In the New Mexico desert at 5:30 in the morning, a group of scientists watched in anticipation as the countdown began. It was silent at first, yet hot and unbelievably bright. Then came the sound. The first-ever atomic bomb explosion... was a success. How did scientists working on the Manhattan Project create what was then the most powerful weapon in history? And how did the bomb’s existence forever change our sense of what human beings are capable of?

July 10, 1943. 150,000 British and American soldiers storm the beaches of Sicily in the first Allied invasion of Nazi-controlled Europe. But the Nazis…aren’t really there to put up a fight. Hitler thought the invasion was coming for Greece. The Nazis have been tricked by two British Intelligence officers and a covert deception plan. How did their operation— which involved a corpse, false identity, and a single eyelash—change the course of WWII?

July 30th, 1858. London is a world city, a global center of trade and commerce. But there’s something less glamorous going on in this bustling metropolis: the smell. Every inch of the city smells like rotting, human waste. And this smell is actually killing people. But no one is doing anything about it. Until today. How did short-term thinking lead to a deadly problem? And how did an unlikely leader finally get London out of this very literal mess?

June 28, 1970. Hundreds of people start to gather on Christopher Street in Manhattan’s West Village for an anniversary celebration. One year earlier, in that very same spot, the Stonewall Inn was raided by police, sparking a revolution. Now, LGBTQ+ people have come here again, not to riot but to march in celebration of who they are and just how far they have come – something that might have been unthinkable if Stonewall hadn’t taken place. How did the Stonewall riot have such a huge impact on queer activism, and how did the community go from raid to parade in just a year?

Apple Spotify Stitcher
The Apple logo, iPhone, iPod touch, and iTunes are trademarks of Apple Inc., registered in the U.S. and other countries..
By submitting your information, you agree to receive emails from HISTORY and A+E Networks. You can opt out at any time. More details:

How can we improve this experience?

Create a Profile to Add this show to your list!